The History of the Springboks

South Africa and England have a rich, historical set of meetings to date, often producing closely fought contests, and always producing thrilling spectacles. Therefore, when the current reigning World Champions visit Twickenham for the 45th meeting between the two nations this November, it promises to be a match up that delivers all of the drama and excitement of the previous 44.

Rugby in its earliest recognisable form was introduced to South Africa in 1862, when Canon George Ogilvie, headmaster of the Diocesan College in Cape Town, introduced the game of Winchester College football to the school. The game was an early version of football whereby the players could handle the ball, which fast became popular, leading to the first-ever recorded match taking place in 1862 between the Army and the Civil service.

Introduced by British colonists and reinforced by ex-International British players in the nation, the game of Rugby Union was introduced to the people of Cape Town in 1875. This quickly led to the first recognised rugby club, Hamilton, being founded in Cape Town later in the same year. The sport fast became popular with locals, and with word spread, Rugby Union quickly replaced the Winchester College version of the game.

Due to fast growing popularity of Rugby Union, the South African Rugby Board was formed in 1889 to govern the sport, and in 1891 the South African national team played their first match against a British Isles touring team in Port Elizabeth. It would be another five years until the nation claimed their first international victory, when South Africa defeated the British in 1896.

Ten years later in 1906, South Africa wore green and gold jerseys for the first time, and added one of the nation's most iconic animals, the Springbuck, to their badge. These kit colours have now become synonymous with the teams' identity, with the Springbuk continuing as a mainstay on their kit, leading to the creation of their now world-famous nickname, 'The Springboks'.

The first of the current 44 encounters to date between England and South Africa came in 1906, when the Springboks held England to a 3-3 draw at Crystal Palace, London. This tough first impression would prove to be a forewarning to England, as South Africa would go on to win the next four matches played against England, between 1913 and 1961.

It would prove to be a long wait for England's first-ever win against the Springboks, which came at Twickenham in 1969, with an 11-8 victory, followed by a first away win 9-18, when the two nations met at Ellis Park in 1972. South Africa would retaliate to these losses by going on to beat England eight times in the nations following eleven fixtures, between 1984 and 2000.

From 2000 to 2006, with a golden generation team, England would carry an impressive run of seven consecutive victories over the Springboks, including a record 53-3 win at Twickenham in 2002. However this impressive run of form would soon come to an end for England, as the Springboks would go on to defeat England twelve times out of the following fourteen fixtures, between 2006 and 2018.

Included within those years came a major blow to England, as the Springboks defeated them 6-15 in a closely fought contest, to win the 2007 Rugby World Cup at the Stade de France, in Paris.

In more recent fixtures the glory has been very much shared between the nations. An away fixture at Newlands and a final home fixture at Twickenham saw two England victories over the Springboks in 2018. However, this form was put to the ultimate test in the following meeting, in the final of the 2019 Rugby World Cup.

Meeting once again at the pinnacle of the sport, the two nations walked out for the final of the Rugby World Cup in Yokohama, Japan, where despite a previous momentous performance and victory by Eddie Jones' side in the semi-final of the tournament, against the All Blacks, the final proved to be another heart-break for England fans. The Springboks prevailed, defeating England 12-32 in an impressive performance, winning the tournament and consequently bragging rights yet again.

In 2021, and with England chasing revenge, the most recent tie between the two nations came in last year's Autumn Nations Series, where a fresh England side, including many newly capped players, met the World Champion Springboks at Twickenham. What ensued was an incredibly closely fought contest, where despite an impressive kicking performance from South Africa's Handrè Pollard, England eventually came back to defeat the Springboks in dramatic fashion, thanks to an eightieth minute penalty kick from young fly-half, Marcus Smith.

Excitement and world-class entertainment has been a consistent theme from all 44 encounters between England and South Africa to date, and this year's 45th meeting in November's Autumn Nations Series promises to be no exception.

Hospitality packages for England v South Africa at Twickenham on 26 November 2022 are now on sale, with prices starting from £799. Secure your place for a day of thrilling rugby and world-class hospitality by booking online via the Twickenham Stadium website. 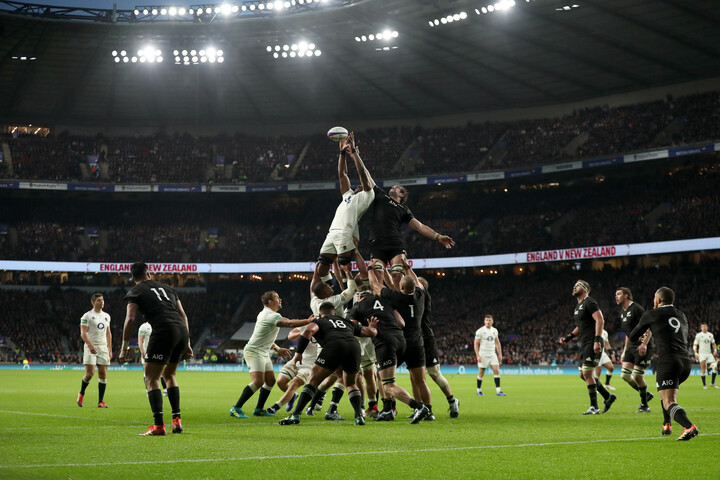 The History of the All Blacks
8th July 2022
Any fixture that involves the world-famous All Blacks ensures to be a spectacle not to be missed, therefore in November when New Zealand visit Twickenham to play Eddie Jones' England…
Read More…

The History of Twickenham Stadium
30th March 2022
From its humble beginnings as a market garden, Twickenham has evolved over the last 115 years into an award-winning, world-class sports stadium.
Read More… 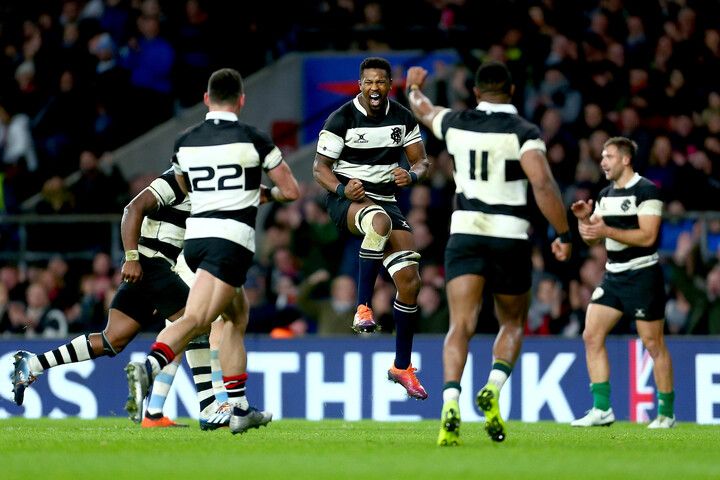 The History of The Barbarians
30th June 2021
The Barbarians are steeped in history, with roots dating back to 1890. Conceived by William Percy Carpmael, the idea was simple: spread rugby to the world, good fellowship,…
Read More…